THE VILLAGE with John Simm as John Middleton

The Village is an epic drama series charting the life and turbulent times of one English village across the twentieth century. The Village is written by BAFTA winning writer Peter Moffat. The camera never leaves the village. Births, deaths, love and betrayal, great political events, upheavals in national identity, ways of working, rules kept and rebellions made, sex, religion, class, the shaping of modern memory – all refracted through the lives of the villagers and the village.

John Simm stars as John Middleton who has lived in the village all his life, and the farm has been in his family for five generations. John is shunned by the village due to a dark event in his past that happened nearly twenty years ago. Since then he has spiralled into decline. The farm has fallen on very hard times and John is killing himself trying to get the harvest in on his own – work that should be done by a whole team. He has turned to drink, and takes out all his frustration and anger on his family.

Tell us about John Middleton…

He’s the head of the Middleton family, a very poor farming family who have had the farm for generations. He’s got a lot of issues and is carrying around a lot of guilt, which becomes evident (and you find out the reason for this later). He is an alcoholic and very unhappy. John loves his wife (Grace – Maxine Peake) – needs her, calls her mother, desperately loves her but beats her as well. He’s a walking contradiction. He is a very scary father and husband when we first meet him, but then he changes.

Did you know much about this period before – did you research?

Yes, I researched into farming of the time and there was this brilliant book that Antonia Bird, our director, gave us Milk, Muck and Memories by Margaret Wombwell. The book was invaluable because they were first-hand accounts of working farmers and their working methods from the period. It might sound rather dull, but it was invaluable to look at. And also Regeneration, by Pat Barker, based around WWI – which I hadn’t read – and this was a great excuse to read it. I also just read around the time, and took it from there.

The Village is about our recent social history?

I’ve never touched on this period before as an actor, so it’s very interesting to do something that I’ve never done before. I was interested mainly in the character, this guy – John Middleton. He’s a very intriguing character – he goes on a huge journey of redemption and a couple of episodes in – he finds god. The character is completely turned on his head and becomes obsessed with preaching – and then the war comes – it’s a hell of a part. Peter (Moffat) is such a brilliant writer, that it was a gift really.

The character, you say, is very flawed.

Characters like that are much more interesting to play – flawed. As interesting as Cal McCaffrey in State of Play was to play – he was the character everyone else revolves around: though flawed he was the glue – they are interesting parts but just not as interesting. I much prefer the flawed character – the hero role is not always the greatest role to play. Take Tarrentino’s Django, which I saw recently, Jamie Foxx plays the lead in it – but he wasn’t the most interesting character.

You have to find something in every character. You have to identify with them, or be sympathetic with them – even if it is only a tiny chink of light – you have to grab it…otherwise, if you don’t believe it – you can’t expect anyone else to believe what you’re doing. I can find things like that with everybody I play and hopefully make them, not necessarily redeemable, but make an audience understand them and why they are how they are. With John Middleton he goes about it the wrong way – but deep down his passion is for his farm, for working, providing – good things. He is too proud and stubborn, and it’s his undoing…but ultimately, underneath it all I can identify with him in some way.

Have you worked with any of the cast/production team before?

I’ve worked with Maxine (Peake) twice before – me and her were in the very first episode of Clocking Off, playing a married couple – very different, she hit me in that one actually – and it’s taken this long to get to hit her back! We were also in The Devil’s Whore together; where she played Elizabeth Lilburne.

Working with the directors Antonia Bird and Gillies MacKinnon…

Antonia was fab. I loved Priest, the film she did with Robert Carlisle, I was a huge fan of that – with Jimmy McGovern’s script. And Safe, which was fantastic! I was really interested in working with her; I’d never had the chance to work with her before so it was a bonus on top of that brilliant script by Peter Moffat. All these things are taken into consideration – like who’s in it, is it a brilliant script, who’s directing it, who’s producing it…as you get older I do find these things more important – especially the Director. I’ve worked with some great directors, and there are some great directors I haven’t had the chance to work with yet – and she was one of them. I also didn’t know that Gillies MacKinnon was going to be coming in to direct the final two episodes – so that was fantastic, two birds, and one stone.

Gillies MacKinnon made you wade through the river in Hayfield…

Yes, on a night shoot. You just have to be ready for all of it. He needed me to wade through the FREEZING cold river – you just can’t say no – you just get on with it.

Was there a memorable scene for you in The Village?

Memorable scenes for me – were the outdoor ones.

Did you enjoy filming up in the Peak District?

It was freezing. The good thing was I just kept thinking – I’m going to be filming for Mad Dogs soon in South Africa…think of the warmth! It was a great script and I find in jobs like this, that are quite challenging because you’re away, and it’s cold, that it’s important to work on the text. The scenes in the kitchen that me and Maxine had, as husband and wife, were so unbearably bleak that you have to have a laugh off set so that it’s fun to do. And then when we go for a take you focus on the brilliant writing, and Maxine is a brilliant actress – it really was a fantastic cast.

And Jim Cartwright as the barman…

Yes. That was a hilarious added bonus – it was an amazing coup that Antonia (Bird) got him to do that. I’d never worked with him before – but am a huge fan of his work – Road, Rise And Fall Of Little Voice…. I couldn’t believe it was him.

It was certainly challenging with those costumes, in that weather. But you know, we’re actors – it’s very easy for us, we have it cushy really. We had foot warmers, and when they stop filming you get a huge coat around you – it’s not the end of the world. You can’t really start to complain when you think it’s what people actually went through. Freezing cold farms in the midwinter – unheated bar one fire. It just makes you appreciate how hard it must have been.

Did you learn a new skill for your character?

Scything – I can do that now – which is back breaking work. I was taught how to scythe and then I did a little practise before we started filming, which was invaluable. I really only did it for a couple days – but my god did I feel it the next day – really hard work! Quite satisfying – once you get to the end of the row that you’ve done all yourself – you look back and go wow – you’ve been working the soil – you can see the physical graft. John Middleton talks about it a lot – the earth and the land.

Are you native to the Peak District?

The accent was an interesting thing – because Maxine and I have got slightly different accents. Mine is so watered down after living in London for over 25 years – so all the Manchester has gone. I can bring it back – but it was different as the peak district, and we just tried to create a ‘northern accent’. We all tried to approximate the same kind of accent. Nico who plays my son Joe, is modern day Manchester and Bill, who plays my younger son Bert, is from Nottingham. All different accents but hopefully, it will all work out and merge – but it’s a fictional village so probably the right accent for them. 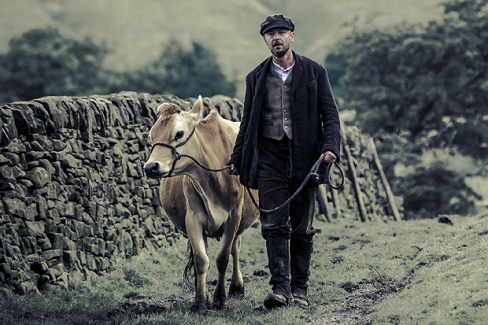 Well I had mud coming out of my ears. It was fine. We had torrential, cold, wet, and muddy weather whilst filming. I wouldn’t choose to do it as enjoyment but there is one scene when me and Maxine are wading through that mud again and again – and fighting and being thrown down. But hey – these are the interesting things about being an actor.

Research for The Village?

Maxine dragged us around all these museums in Manchester – which was fantastic including the Museum of the Working Man and they were all fascinating. One was like a library – like I said, they’re the best part of my job – being able to do research and so forth.

Thermals. Maybe some really good boots, hand-warmers… electricity. Basically something to keep me warm and dry – maybe a 4 wheel drive with a really good heater!