Military heroine Lance Corporal Michelle Norris was chosen to carry The Book of Remembrance into a celebrity-filled memorial service at the Royal Albert Hall.

The courageous 20-year-old, of Stourbridge, became the first woman to be awarded the Military Cross earlier this year.

The Wolves-mad soldier made national news when she dodged sniper fire to save the life of her commanding officer while on her first tour of duty in Iraq last year. And she was given a central role at The Royal Festival of Remembrance on Saturday evening.

Lance Corporal Norris was back in York today with the Royal Armoured Medical Corps who are preparing to return to Iraq before Christmas. Her mother Susan, who was at the service, said today: “It was just absolutely unbelievable. Michelle said it was the greatest honour that could have been bestowed on her.”

Hundreds of ex-servicemen and women packed the hall for The Royal Festival of Remembrance.

The auditorium fell into silence as thousands of petals fell from the dome, representing those who had died in combat. 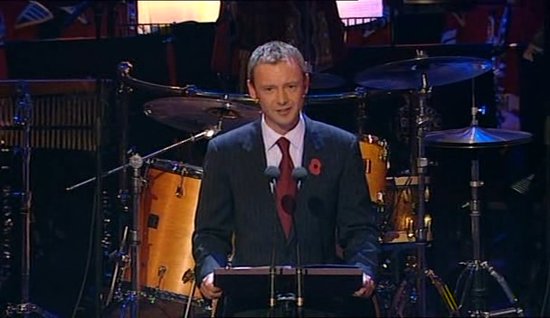 A host of celebrities also took part in the event, with Life on Mars and Dr Who actor John Simm and Bill Roache aka Coronation Street’s Ken Barlow giving readings. The ceremony was narrated by newsreader Huw Edwards and the Duke of York read the Lesson. Forces’ sweetheart Katherine Jenkins added a touch of glamour to proceedings. Male group Blake sang Hallelujah while All Angels performed Sanctus Deus.

There were moments of great poignancy, such as when 109-year-old war veteran Harry Patch appeared on the stage in his wheelchair. From Wells, Somerset, he was called up in 1917 and saw service at Passchendaele.

The Torch of Remembrance, an expression of hope, was carried by Corporal William Rigby, 4th Battalion, The Rifles, whose twin brother John was killed in Iraq.

The service was conducted by the Right Reverend Nigel McCulloch, Bishop of Manchester and National Chaplain to the Royal British Legion.

A Letter from Passchendaele – Read by John Simm


Special thanks to Ducky (screencap) and ohmygodfathers (video) from The Railway Arms.