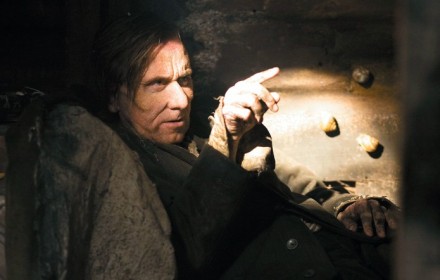 Mostly, I prefer being an adult to having been a child; my childhood was often miserable, and I longed to escape it. One of the things I do miss is the ability to lose myself completely in fiction. The child who is reading truly doesn’t hear the words, “Your tea is ready!” But the adult who is reading always hears the shout, “I made this sodding gin and tonic for you eight hours ago!” however much they pretend not to.

When you’re a child, you can creep into books and hide there. When you’re an adult, your shopping list keeps inviting itself in – or the row you had with that woman on the bus. This is why I loved Skellig (19 April, 3.55pm), adapted from the children’s novel by David Almond. It wasn’t exactly that I got wholly lost in it, but it did remind me very strongly of what it feels like when that happens.

So, I can only assume that, for any child, it must have been bliss.

It was so beautifully done. Skellig, a strange, ossified man with wings whom a little boy called Michael finds in a derelict shed, is an angel, although this is never actually spelled out. He can fly and perform miracles. Making this kind of stuff work in a child’s head is relatively easy if you are a good writer, and Almond is a very good writer. But making it work on screen is bloody difficult unless you’ve an awful lot of cash to splash: creaky CGI, and your audience will just titter (the awfulness of a distant BBC production of The Lion, the Witch and the Wardrobe haunts me still; Aslan looked like he’d walked straight out of the Hamleys soft toy department).

Happily, Sky is investing heavily in original drama for its high-definition channel, so Skellig’s wings were a marvel – not attached, so much as grown. The scene in which Michael and his friend Mina washed his mangy old feathers with soapy water was so vividly real, that when he finally flew, something good happened to the pit of your stomach: mine flipped over.

And what a cast. Michael’s parents, distracted by the birth of their poorly new baby girl, were played by John Simm and Kelly Macdonald: generous, low-key performances that enabled Bill Milner (last seen in the movie Son of Rambow) to shine as Michael. Nine times out of ten, I can’t stand child actors – blaarrgh! – but he has one of those faces. It’s not just cute; it’s sardonic and wry way beyond his years, and there is just a hint of something weird and mesmerisingly Spockish about his eyebrows.

And then there was Skellig, rude, arthritic and slow-blinking. Inside his scaly face paint, Tim Roth played him like a homeless junkie, effortlessly heavy-lidded, as curled and as crusty as a stale croissant. When he plucked a snail off the wall and ate it with the same challenging delectation as some men display in attacking lamb’s kidneys, or a particularly stinky cheese, I let out an involuntary squeal. (Please understand: I am not the kind of person who indulges in involuntary squeals in my ordinary life.) more