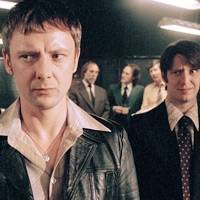 John Simm in Life on Mars

JOHN Simm manages to come across as both laidback and edgy at the same time.

In the 25 minutes I spend in his company he is charming, witty, intense and just a little bit acerbic. These are all traits that should stand the Life on Mars star in good stead when he takes on what is widely regarded by the acting fraternity as the most challenging role there is – Hamlet.

Simm plays the title role in a new production of Shakespeare’s classic tragedy which opens at Sheffield’s Crucible theatre on Thursday. It is the first time Hamlet has been performed at the Crucible in 15 years and this latest production, which also stars John Nettles and Michelle Dockery, has been eagerly awaited since it was first announced back in December.

We meet up in the theatre’s cavernous cafeteria where Simm explains why he agreed to play the Prince of Denmark.

“It’s the most challenging part that is available to an actor and therein lies the attraction. It’s the greatest part ever written for a young, well young-ish, actor. It’s a pinnacle and to be asked to play Hamlet is wonderful because there aren’t that many people who do.”

The play runs for five weeks, rather than the three month-run he’s used to in London, and he’s delighted to be performing at the Crucible.

“It’s a fantastic theatre. I came up to see An Enemy of the People and it’s sensational. As you walk in there’s a majestic roof fretted with golden fire, it’s like there’s lights in the sky and I just thought it was the perfect place for Hamlet.”

Hamlet is not only one of the greatest fictional characters ever created, he’s also one of the most complex.

“Apparently, Hamlet plays you, that’s what I’ve been told and you let things happen to you,” Simm says. “For an actor to put across what happens to Hamlet is a journey in itself, the whole gamut of emotions that he goes through is unequalled in Shakespeare. Iago has a similar number of lines but I don’t think that’s as difficult a part.”

It’s impossible to talk about Hamlet without mentioning those who have played him before. John Gielgud, Laurence Olivier, Richard Burton, Kenneth Branagh, Ralph Fiennes and latterly David Tennant are among the famous names who have left their indelible mark on Shakespeare’s greatest character. Does this make the challenge even more daunting?

“I can’t really think about all those people who’ve done it before. I didn’t see David (Tennant] playing him and I didn’t see Jude Law’s. I haven’t seen Hamlet since I was about 22 and I can’t even remember who played him it was that long ago. I just come at it as I do with any normal job. I mean it’s inevitable at some point you’re going to start thinking about it because the pressure is immense, but that’s what happens when you take on the role.

“But I can’t be thinking about Burton and Olivier and people like that, I’d go nuts.”

The pressure of playing Hamlet in such a high-profile production is immense, which is why Simm is trying to keep a sense of perspective about the task ahead. “It’s just a part in a play, there are lots of other people in it and I’m just going to play my part and keep it simple and do it as best I can, he says. “I’ve just got to let what happens to him happen to me. There’s no point, I don’t think, making a character out of him, and I think that’s what they mean when they say ‘he plays you’.

“You can’t give him a limp and a parrot and an accent because you’ll really be making trouble for yourself. So he is you. Although having said that, I’ve got to be a royal prince and that’s the only thing I’m focusing on, how he acts and reacts. But outwardly and physically he’s me, I guess.”

Despite this apparent diffidence he can’t wait to get started. “It’s just a brilliant story, it’s a revenge tragedy with bits of comedy and Hamlet’s a hero, but at the same time he’s not a hero – it’s the kind of part that I really love.”

Although Simm was born in Leeds, he grew up in the mill town of Nelson, in Lancashire. His father was a musician and from the age of 12, Simm joined him on stage in the working men’s clubs dotted around the North of England. This, he says, made him grow up quickly and probably makes the subsequent slings and arrows of TV critics seem like, well, mere trifles.

After studying at the Blackpool and Fylde College, in Lytham St Annes, he went to drama school in London. “We were trained for classical theatre and that’s all we did and that’s what I expected to be doing. I deliberately went there to do that and it just happened that I ended up doing TV and film and I got on a roll.”

This roll started with The Lakes and Cracker and led to roles in films like Human Traffic and 24 Hour Party People. But it was as Det Insp Sam Tyler in the brilliant and hugely popular TV series Life on Mars that he became a household name. He admits he was surprised at just how successful it was. “We thought it was going to go either way, it could have been an absolute flop because it was so ridiculous, or
it would be like nothing anyone had ever seen before. I thought it was a mash up between The Sweeney and Back to the Future and you never know if it’s going to work, but thankfully it
did and credit to the BBC for taking it on.”

But despite all the recognition and acclaim, the intense filming schedule took its toll. “I was in pretty much every scene and I wouldn’t say I’d lost the enjoyment but I didn’t feel anything when the cameras started rolling. So I needed to get some zing back, some mojo, and I thought going back on stage would do that and give me that frisson that you don’t get when you’re filming,” he says.

So after dedicating two years of his life to Life on Mars he took a part in a play called Elling, which tells the story of two Norwegians released from a mental institution and their attempts to live in the real world. The production was directed by Paul Miller, who is directing him again in Hamlet, although it didn’t turn out quite the way he had anticipated.

“I naively thought it was a bit out of the way and no one would notice, but it sold out because of Life on Mars and then it moved to the West End. So this low-key return to the theatre turned into something else completely. Don’t get me wrong, it was brilliant and I did get nervous again so I rediscovered whatever it was that I was missing.”

He was soon back on our TV screens, this time playing Dr Who’s arch enemy, the Master. “They wanted a new Master for David Tennant and we came up with one that would be his equal, rather than a pantomime villain twirling his moustache. And if the new writers bring him back it would be nice to have one more crack at him,” he says.

These days Simm has the rare luxury of being able to choose which roles he takes. “I’ve turned films down before that I didn’t think were any good. If I read a brilliant TV script by someone like Paul Abbott or Tony Marchant, I’d much rather do that than a bad film. We do TV really well in this country and when it’s good it’s pretty hard to beat and I’ve had quite a good radar, so far, for this kind of thing.”

Which is why he has no burning desire to go to Hollywood. “I’m quite happy here and when I look at the parts I’ve had – Raskolnikov, Van Gogh, time-travelling ’70s cop, the Master and now Hamlet, I’m more than happy and I’m so lucky, I feel totally fulfilled with my career and hope it continues.”