Terror is integral to the pleasure of John Simm, who takes on “the greatest role ever written”, Hamlet, at the Sheffield Crucible. 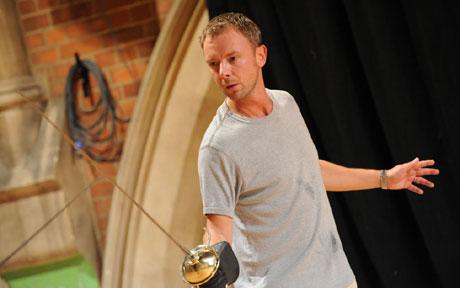 Three giant black-and-white photographs, dominated in turn by Derek Jacobi, Kenneth Branagh and Joseph Fiennes, are ranged across a wall of the Sheffield Crucible’s swish new bar. An imposing trinity: Jacobi as Prospero; Branagh as Richard III; Fiennes as Edward II – each captured in a mood of profound contemplation. Here they are: the poster-boys for the Crucible’s blazing reputation, secured over the past decade, as a powerhouse for the finest productions of classical tragedy in Britain.

Remarkable, I say, as John Simm drops into a chair underneath this wall of fame, how the photographer managed to catch that aspect of pure concentration. Simm, ineffably cool in black leather jacket, white T-shirt and blue jeans, albeit sweaty and buzzing after a run-through of Act 1 of Hamlet – in which he is to make his imminent, astonishingly high-risk Shakespearean debut here – looks up and grins.

“Yeah,” he says, without missing a beat. “It’s also possible they were just posing!” It’s that grin, that quickness, that laid-back – some might add Lancastrian – sense of humour (he grew up near Burnley) which explains why Simm, 40, is held in such devoted regard – and why he may have the requisite nerve to make the leap from a career-path defined by major TV roles through a theatrical hoop of fire.

In the first instance, Hamlet calls for an actor who can switch between contrary moods – from low melancholy to dangerously high spirits, from contained revulsion to a spiralling madness, the “antic disposition” with which the grieving Prince tries the patience, and conscience, of the court at Elsinore. Time and again, in a stream of high-definition small-screen performances, Simm has shown himself just such a mercurial creature, often understated yet always intensely expressive, able to combine seriousness and questing integrity with a saving glint of mischief and boyish unpredictability.

Able, too, as we saw in his hypnotic turn as The Master on Doctor Who, as the tormented Raskolnikov in Crime and Punishment (BBC2) and as manic depressive Vincent Van Gogh (C4) to go full tilt at high derangement.

“I’ve had a lot of practice playing nutters,” he jokes. “I’m good at portraying angst.”

In Life on Mars (2007), the top-rank cop series for which he’s best known, and which he made his own, his character, DI Sam Tyler, would sometimes wake in terror to find himself still trapped back in the harsh 1970s Manchester apparently generated by his comatose brain. Does Simm, who could be happily spending his autumn with his wife (the actress Kate Magowan) and two kids back in north London, comfortably waiting for another juicy telly part to come along, ever wake up in a cold sweat wondering what on earth he’s got himself into?

“Do I think, ‘Why am I doing this?’ Oh God, yes!” he says, gulping at his pint of Guinness. “It’s a hell of a lot of pressure. I may get absolutely slaughtered.”

When he last trod the boards, in the fiendishly intricate four-hander Speaking in Tongues, revived in the West End a year ago, he got so scared on the opening night that he considered faking a cardiac arrest. “I was so nervous that it honestly went through my head, ‘What if I genuinely try to do the best acting I’ve ever done in my life and pretend to have a heart attack?’ While I was thinking that, the green light went on, and I had to go on stage. I get terrified by doing theatre. I can’t imagine what I’m going to be like doing this.”

Right now, he says, “it’s like being at the base camp of Mount Everest thinking ‘Oh hell, here we go.’ ”

But the terror is integral to the pleasure. It was, incredible though it sounds, the all-consuming nature of Life on Mars, the relentless workload of it, that pushed him back towards the intimate embrace of theatre.

“I was in every single scene and it wore me down. I was churning it out. It got to a point where I went numb with it. I didn’t feel nervous. I didn’t feel a thing when the light came on and they said ‘Action!’. It was soulless and I thought, ‘This isn’t why I became an actor’.”

When he left London’s Drama Centre in 1992, he expected to work in classical theatre. “That’s what I had trained for. It just so happened that when I left I got an agent and got a job in Rumpole of the Bailey and I never looked back.”

With only two stage roles under his belt in the last 14 years, Speaking in Tongues and, before that, Elling – a Norwegian comedy hit in which he played an agoraphobic oddball newly released from an asylum – he never assumed Hamlet was his for the taking.

“There comes a time when you look in the mirror and you say to yourself, quite reasonably, that you’ll never play the Dane. I had thought ‘That’s it – it’s gone’. When Paul [Miller, his director] and I started talking about it, it was more as a fond hope. It’s much easier said than done. So when the Crucible came up with this offer, I almost bit their hand off. I’d have been insane to turn it down.”

He has ended up in an unofficial contest of sorts this month with Rory Kinnear, who’s giving his Hamlet at the National. He likes the symmetry: “The South has got one, the North has one too – it’s perfect”. The production will be set in a 19th-century Russian milieu – “swords and winter coats, not guns or,” he shudders, “CCTV”.

As for his interpretation – well, that’s going to be written in the white-heat of performance. His pal, and a phenomenal success in the role himself, David Tennant texted him to advise him to ‘enjoy it’, while Mark Rylance has counselled him to ‘Just be in the moment as the drama unfolds, and let the audience worry about the rest.’ That’s wonderful advice,” he says. “The thing most often said about Hamlet is that you don’t play him, he plays you,” he continues. “I didn’t really understand what that meant until I started to do it. You have to try not to approach him as a ‘character’. The challenge is that you get to play the greatest role ever written but you’ve also got to be yourself while you’re doing it.”

He takes another swig from his pint, a wild gleam in his eye, and half-grins, half-grimaces. “That, to me, is what makes it so terrifying and so perfect.”

Not a palpable hit for Rickman, whose sardonic, lounging account of the Prince for the Georgian director Robert Sturua conveyed a strong line in disturbing menace but was generally felt to lack sufficient passion.

Though the verdict was divided about Matthew Warchus’ flamboyantly inventive, text-stripping version, Jennings’s suave, aloof but brittle Prince – later likened to “a dyspeptic refugee from a Noel Coward comedy” by the American critic Ben Brantley – combined acid comedy with a fit-to-burst sense of roiling emotion.

“I seriously think that this is my last chance of doing Hamlet,” Beale confessed, ahead of an award-winning, grief-struck performance that answered all the sneers about his portly physique with one of the crowning interpretations of recent times. –

“I’ll probably fall flat on my face,” warned Eccleston, who in common with Simm, a fellow Lancastrian, had no prior Shakespearean experience. The critics responded favourably, marvelling at his flinty intensity and intelligence.

One thought on “John Simm on playing Hamlet”