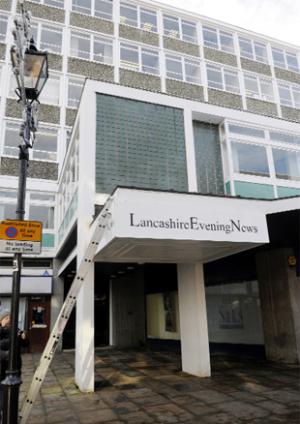 East Lancashire actor John Simm will be filming his new BBC1 drama today – in the offices of fictional newspaper the Lancashire Evening News.

Exile is a three-part series created by Burnley’s Bafta award winner Paul Abbott, who has teamed up with writer Danny Brocklehurst, who he worked with on Clocking Off and Shameless, for the psychological thriller.

The BBC film crew has transformed an empty Bolton shop, a few doors away from our sister newspaper The Bolton News’ offices, into the headquarters of the Lancashire Evening News.

Exile follows down-on-his-luck journalist Tom (Simm) who returns to Lancashire to be reacquainted with his father, played by Jim Broadbent, who is in the grip of dementia.

While investigating the reasons behind them becoming estranged, he uncovers a mind-blowing scandal, which changes their lives forever.

AbbottVision and Red Production Company are making the drama and they will arrive in Bolton today to film a scene at the Lancashire Evening News.

Tom will use the local paper as a source of information for his investigations.

Filming, which has mainly taken place in Oldham, started last month and is due to continue until the end of January.

The series is expected to hit our screens in the spring.