It’s back-to-school in Muswell Hill. Teens with shoulder-slung pouches are having one last cruise on The Broadway; pre-teens are wolfing a final lunch with a frazzled parent. And, for one neighbourhood dad, it’s back to work.

John Simm has had the summer off, enjoying the heat, the World Cup, the latest Arctic Monkeys album and hanging with his children, Ryan, 17, and Molly, 11. “I don’t know how much longer my wife will tolerate me being at home,” he jokes of actor Kate Magowan. “It’s been a lovely break.”

Not that you’d think the 48-year-old has been putting up his boxfresh adidas-shod feet. Strangers, starting on ITV next week, is Simm’s third drama in eight months. If this is the era of peak TV, 2018 is also the year of peak Simm. 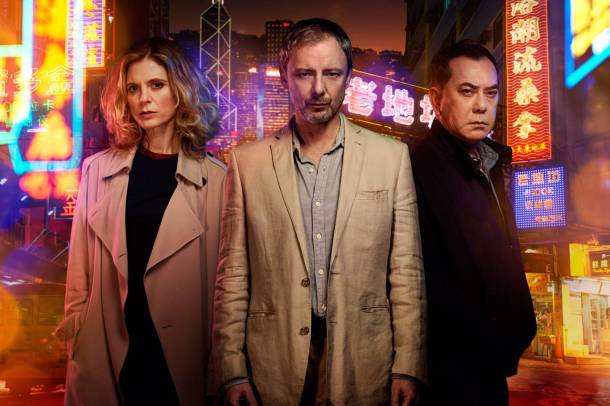 And this after a four-year absence from UK TV screens for an actor who starred in a fistful of the most powerful series of the Nineties and beyond: The Lakes, State of Play, Life on Mars, Exile.

This year there was David Hare’s timely socio-political thriller Collateral, in which Simm played an MP opposite Carey Mulligan’s copper, broadcast on the BBC in February. Simultaneously, ITV aired Trauma by Mike Bartlett. Simm was a father harassing the surgeon (Adrian Lester) he blamed for his son’s death. “It was a bit weird,” begins Simm, Lancashire accent not wholly flattened by three decades in London. “Collateral and Trauma came out at the same time — same day, same hour. Ridiculous. It made me quite angry, actually.”

Not only were his shows eating themselves, it looked as if Simm had strategised a “ta-dah, I’m back!” return. “And I didn’t,” shrugs this stoutly unshowy, strictly non-celeby actor. “I thought with two jobs, spread over the year, I could slowly creep back into people’s consciousness. And suddenly, bang, there are billboards, it’s on the front of the Standard, you can’t really escape it. Then, of course, you get asked: ‘How do you feel about being on all the channels? Are you in everything?’ I thought: ‘God, I haven’t been on telly for four years, this is not fair. It’s overkill already and they’re not even out yet’.”

Simm says all this jovially enough, alert to the perception in some quarters that he’s prone to grumpiness. Or, as he puts it: “I have to be very careful because I always sound like I’m moaning, and I don’t mean it in that way.”

Certainly today he’s sunshine and smiles, although this proud fanboy would much rather shoot the breeze about music (the return of Paul McCartney and of his old pals Echo and the Bunnymen) and the work of others (Netflix’s Ozark, Christian Bale’s Hostiles) than dissect his career.

He ducked out of the UK acting scene in 2015. During a stint in Trafalgar Studios’ revival of Harold Pinter’s The Homecoming, his dad died. They were especially close, the father-son bond reinforced by formative years as a musical double act on the northern club circuit. “It was a Pinter winter,” Simm says with black humour, aware that he has another looming — he’s appearing in Homecoming director Jamie Lloyd’s upcoming Pinter at the Pinter season. “Then I went pretty much straight offstage on to a plane to LA.”

He worked alone for a year, filming producer Shonda Rimes’s comedy drama The Catch. “I came back as much as I could. Even if there were four days off, I’d jump on a plane. My worst thing was getting two or three days off. Which sounds like it should be fun, and it would be if I was 24. But it was two or three days of me just wandering around LA, missing my kids, thinking about Skype, and trying to remember that this is a job and I’m getting paid for it.”

A tough time, but he rationalises it now. “Maybe I did jump off stage and run, away from winter and everybody crying and my dad not being there.”

But at the same time, The Catch was something new, “a comedy part, which I don’t really get here because they have me in this ‘angst’ box”, he frowns, drawing a square in the air. “I don’t watch those glossy American dramas. But it was fun.” Indeed, considering the prospect of a third series of the show, he and Magowan considered relocating en famille to LA. “We were going to get the schools sorted — it is a complicated thing to arrange. Then it got cancelled. Everything gets cancelled apparently over there,” he says sardonically.

Were their kids gutted? “A bit. One of them was like: ‘Phew, I didn’t want to move away from my friends’. The other one was like: ‘What? Really? I thought we were moving to LA?’”

Returning to the UK he reprised his role as The Master on Doctor Who, appearing opposite Peter Capaldi in last summer’s two-episode finale for Capaldi’s 12th Doctor. “I love Peter. He lives around here. We share a personal trainer. Every time we see each other one of us is gasping for breath and the other’s going, ‘Don’t hug me!’”

Then it was the near back-to-back filming of those three new dramas, culminating in three months in Hong Kong for Strangers. “It was a long gig, man,” Simm admits with a wince. His family flew out with him for the first two weeks, “which was great. Then I started working and they left me there. Which was quite upsetting, even though I’m used to it. It was almost worse than me waving goodbye as they stand in the doorway and I drive to the airport. When they left me at the hotel in Hong Kong, I got really upset. But I just went to the gym and ran for about an hour, Queens of the Stone Age pumping in the headphones. Then we went out and had a few beers and it was fine.”

On the evidence of two episodes the eight-part series will be as twisty and tense as previous shows from executive producers Jack and Harry Williams (The Missing, Rellik). Simm plays London-based professor Jonah Mulray, whose wife dies in mysterious circumstances in the former colony. Visiting for the first time, Mulray finds himself entangled in conspiracy and corruption alongside a wingwoman from the British Consulate (Emilia Fox). But the real star might be Hong Kong. “Fantastic location for a thriller,” agrees Simm. “My God, it’s an assault on the senses. And the crowds! I’d walk outside the hotel on a Tuesday afternoon and it was like New Year’s Eve on Oxford Street.”

He admits he suffered from “capital dread”. “I was getting sort of itchy about London, thinking I’d been there for a long time, maybe we could go somewhere a bit quieter, less polluted, all that… And when I came back from Hong Kong I thought: ‘Actually, London is half-empty’. So, I’m not moving anywhere.”

John Simm is back. Just don’t call it a comeback.

Strangers begins on Monday 10 September at 9pm on ITV.