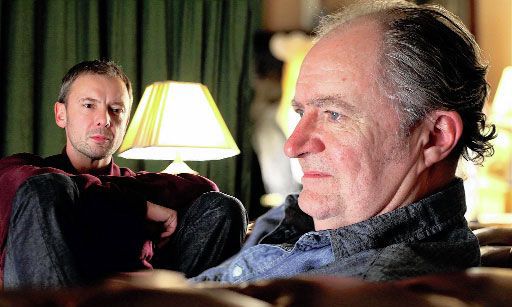 Ramsbottom is again set to be star of the small screen. Oscar and BAFTA winner Jim Broadbent and well-known star John Simm were both in town filming a new BBC thriller.

Upper Bridge Street was closed last Sunday and hundreds of intrigued residents have passed filming crews all week who were shooting scenes for the program ‘Exile’.

The three-part drama has been created by Paul Abbott and written by The Street, Shameless and Clocking Off writer Danny Brocklehurst.

Ramsbottom recently became a hotspot for celebrity sightings after Coronation Street chiefs chose it as a suitable location to film, with Will Young also living in the area briefly while working.

Ramsbottom councillor Barry Theckston said: “We might have to get white letters on top of Holcombe Hill like the sign in Hollywood, which says ‘Ramsbottom’. I’m a great believer in anything that promotes Ramsbottom is a good thing.

“We all know it is a very photogenic town with unique shops and businesses.

“I suppose it is one of the reasons why these film directors and TV producers use Ramsbottom.”

Exile follows Tom Ronstadt (Simm), a successful London journalist, who decides to return to his hometown for the first time in 18 years to be reacquainted with his father (Broadbent).

Tom finds his father Sam, who he idolised as a child, in the grip of Alzheimer’s – a once formidable man now being cared for by his younger sister Nancy, played by Olivia Coleman (who has appeared in Peep Show Beautiful People).

Over the serial Tom unravels the mystery linked to his childhood that drove him away all those years ago and his investigations lead him to expose a mind-blowing scandal, two decades old, that changes their lives forever.

Ramsbottom resident Steve Pollitt said: “When I went past on Sunday it was quite late at night and the crews were still there.

“I saw John Simm and a scene they were filming.

“I thought if it takes them that long to do that – how long does it take to film the whole thing?”

He added: “Upper Bridge Street was sealed off.

“There were lots of crew members. In the past they have filmed the comedy series Brassed in Summerseat.

“When the BBC moves up to Salford I think crews will use Rossendale and Ramsbottom more as they are ideal settings.”

Filming on Exile has taken place all week at locations including Bridge Street, Railway Street, The Grants Arms, Silver Street and Back Bridge Street.

It is directed by John Alexander and will appear on BBC One later this year.

Creator Paul Abbott said: “Creating the series came from looking at the effect events have on families – and how that changes lives forever.

“Working with John Simm again is always a pleasure, he does seem to have turned into a muse of mine.

“I’m also delighted that we have the calibre of Jim Broadbent alongside him.